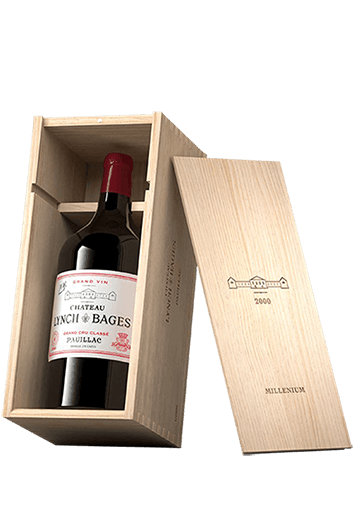 In the land of Bages at the gates of Pauillac, Château Lynch-Bages is a property that has marked the history of the Médoc. While the Bages terroir has been known for its quality since the 16th century, it was only in the 18th that it became famous. With an Irishman by the name of Thomas Lynch at the helm of the estate, Château Lynch-Bages was recognised at the Universal Exhibition in Paris. The estate was acquired by the J-M Cazes family right after the Second World War. Château Lynch-Bages is today considered one of the most important references of the Pauillac appellation.

Poised on Pauillac’s Garonne gravel soils, the 109-hectare vineyard of Château Lynch-Bages are under the direction of Nicolas Labenne. The homogeneous geology of the soil allows for a good supply of water to the vine in an area where the climate is moderate.

The 2000 Millennium Box by Château Lynch-Bages enhances this exceptional vintage through a limited edition set of numbered double magnums wines. Each label is hand-signed by Jean-Michel Cazes and each bottle is presented in a sophisticated and individual numbered box.

Although the forests and wooded plots of the estate were badly hit by the storm of  December 27th 1999, the vines were spared. Subsequently, the mild and relatively wet conditions throughout the rest of the winter favoured an earlier budburst than in other vintages. Although flowering was rapid and uniform in June, the grape bunches did not emerge very quickly. The absence of rainfall between mid-July and mid-September allowed for optimal and uniform ripening. The grapes harvested between 25 September and 10 October under good weather conditions boasted a very high quality and gave rise to a great wine.

Well-balanced and harmoniously structured, this fine Pauillac wine seduces with its beautiful freshness and exceptional length on the palate.

Other wines that Could be of interest to you