A Third Classified Growth of the official classification of 1855, Château Palmer is a true star of the Margaux appellation, on the Left Bank of the Bordeaux region. After building its legend...Read More

A Third Classified Growth of the official classification of 1855, Château Palmer is a true star of the Margaux appellation, on the Left Bank of the Bordeaux region. After building its legend on vintages that have become legendary, Château Palmer continues to make history under the direction of the talented Thomas Duroux.

Blessed with an exceptional terroir located in the immediate vicinity of the Gironde estuary, Château Palmer is rather unusual for the Médoc, with a high proportion of Merlot (47%), complemented by a equal proportion of Cabernet Sauvignon (47%) and some Petit Verdot (6%).

The core philosophy of Château Palmer is based on a simple desire: to reveal the pure expression of a complex terroir. In quite the forward-looking approach, Château Palmer was one of the pioneers to introduce biodynamics to their vineyards in 2008.

Château Palmer is above all a unique style, exceptional in the Margaux appellation. Endowed with immense class and defined by an exemplary precision, the wines of Château Palmer present an aromatic bouquet of great nobility. The character of Merlot inevitably emerges through a brilliant expression of fruit. A silky texture upon perfectly extracted tannins, the palate is quite charming in youth, expanding significantly over the years. A great Margaux indeed.

Chateau Palmer | An Exquisite Expression of the Margaux Terroir 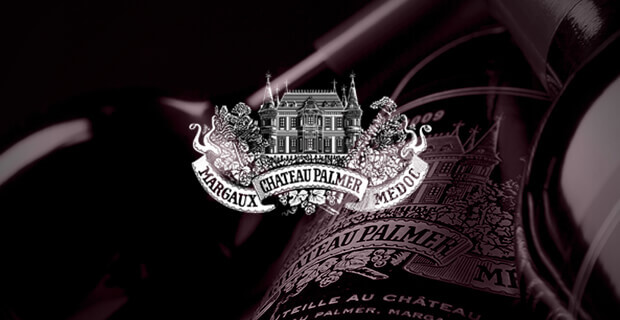 With its brilliant gold label and bright red capsule, a bottle of Chateau Palmer stands out as the centrepiece of any dinner table, a staunch expression of Bordeaux in general and the great terroir of Margaux to be specific. The historical property expands over 66-hectares of beautiful gravel soil, home to a biodynamically managed vineyard overlooking the Gironde estuary. The Chateau Palmer Grand Vin and its Alter Ego offer two different expressions of the same magnificent terroir, a true representative of the Medoc.

Chateau Palmer through the Centuries

The story of the Chateau Palmer that we know today begins in the year 1814, when Lieutenant Colonel and future major general in the British Army, the charming Charles Palmer, met a young French widow named Marie Brunet de Ferriere for a stagecoach journey across France. By the end of the ride, the widow had fallen for the lieutenant colonel and she agreed to sell him the vineyards in Medoc that she had just inherited, an estate that the man had never previously visited. This property was originally part of Chateau d’Issan, but in 1748, 50 hectares of the estate passed to the Gascq family. The wines produced at the estate rose to fame over the years and under the Chateau de Gascq they became popular in the Court of Versailles. Marie Brunet de Ferriere was the very last of the Gascq family to inherit the chateau and was seeking to sell it by the early 1800’s.

After returning to London, Charles Palmer hired a managed to look after his brand new Bordeaux estate and for 30 years he devoted himself to expanding the vineyards, increasing the area under vine to 80 hectares, and modernising the winery. Palmer’s friendship with the Prince Regent and his own social status allowed Palmer to introduce the wines of Chateau Palmer to British high society, where it quickly became popular. Charles Palmer’s most important legacy, however, was the signature style he lent to the wines of the chateau.

Following a period of economic hardship, Chateau Palmer changed hands twice before its acquisition by the Isaac and Emile Pereire in 1853. By that time the brothers had built a very successful business investing in railways, real estate, banking and industry, and they were ready to take on a new challenge: making world-class wine from the great terroirs of Bordeaux. In just a few years they further increased the total area of the vineyards, constructed a neo-Renaissance chateau and named the area around it – a labyrinth of outbuildings and wine-related work spaces - the Village. Through the many difficulties brought by the turn of the 20th century – oidium, phylloxera, two World Wars and economic crisis – the Pereire family managed to maintain the reputation of the chateau, until they were eventually forced to sell it in 1938.

At this time, 4 wine merchant families involved in the Bordeaux wine trade purchased shares in the estate and rebuilt the chateau after the wreckage of World War II. Through their generous investments, the wines of Chateau Palmer were brought to the peak of their quality. In fact, the 1961 – a legendary vintage in the history of Bordeaux – was so lauded among critiques that since this year, the estate is considered a “Super Second,” despite its Third Classified Growth status by the 1855 classification. Today, the property is still owned by 2 of these original 4 families – the descendants of the Sichel and Malher-Besse line. In 2004, Thomas Duroux was brought on as the manager and began producing some of the best vintages in the history of the chateau.

Chateau Palmer reigns over 66 hectares planted with vines in the Margaux appellation of Medoc, on the Left Bank of Bordeaux. In the Medoc there is a saying that goes, “The greatest of terroirs overlook water.” This is certainly the case for the vineyard of Chateau Palmer, which are located along the Gironde River and its estuary, benefitting from the microclimate created by the later. The fog coming off the river protects the vines from the harshest cold of the winter and cools the temperature during the summer. In fact, it was Chateau Palmer’s proximity to the Gironde that helped it survive the frost of April 2017, which devastated many other estates in Bordeaux.

The vineyards are located on the very first gravelly terrace of the Brauzes plateau, a very well-drained soil and rich with deposits from the nearby Garonne and Dordogne Rivers. This gravel terroir is widely associated with and praised for producing some of the most famous wines of the Medoc. While these soils are quite difficult to cultivate for agriculture, they are ideal for growing grape vines, Cabernet Sauvignon in particular, as they force the roots to stretch very deep into the soil in search for water. The increasing surface area of the root as it grows leads to a higher degree of contact between the plant and its natural environment (the soil), leading to a higher degree of complexity in the finished wines. The vineyards of Chateau Palmer are planted with around equal parts of Cabernet Sauvignon – the flagship varietal of Bordeaux’s Left Bank - and Merlot, along with a touch of Petit Verdot. The final blend is created each year from these three varietals, which are believed to bring power and structural richesse (Cabernet Sauvignon), generosity and suppleness (Merlot) and a hint of spice (Petit Verdot) to this Bordeaux wine.

Chateau Palmer: The Biodynamic Philosophy of a Bordeaux Classified Growth

As of the 2014 vintage, all 66 hectares of the Chateau Palmer vineyards have been cultivated according to biodynamic principles. The estate is managed by the philosophy of Thomas Duroux, part of a new winemaker generation, who believes in the power of technology to improve vineyard management by making it more environmentally friendly. After the first few difficult vintages of 2004 and 2005, Duroux began a comprehensive study of the estate’s soil to identify how biodynamic practices could best be applied to the viticulture here.

The vineyards were photographed with infra-red cameras to analyse vigour and extensive sampling was carried out to map out various degrees of water stress and nitrogen level. The estate also prohibited the use of pesticides in treating the vines, even if it meant lowering the overall yield. Today, the grass and flowers growing amidst the vine rows are grazed by a herd of 109 sheep between November and March. The sheep maintain the healthy state of the soils by limiting growth and add nutritious organic matter back into the ecosystem, helping the vines to grow. And in the cellar, the team began vinifying parcels with different terroir characteristics separately in order to achieve a better representation of every aspect of the vineyard. With the 2014 vintage, the chateau also stopped adding sulfites during the winemaking process.

Chateau Palmer carried out a “precision winemaking,” dividing the 66-hectare vineyard into 106 plots based on varietal, soil and quality. In the estate’s great sorting hall, the grapes are added to a vibrating sorting table and first manually sorted by the team. The grapes are then destemmed before going through an optical sorter. After a light crushing, the grapes are transferred to the vat. The vat room at Chateau Palmer is home to 54 conical vats of varying sizes, in which grapes are vinified parcel by parcel, varietal by varietal, vintage after vintage.

The fruit then undergoes alcoholic fermentation in the temperature-controlled stainless steel vats, with a machine periodically pouring over wine from the bottom to break up the cap of skins. Duroux prefers this process (remontage) to punching the cap down (pigeage), as he believes it is gentler than the latter and does lead to excessive extraction. After around 10 days of maceration, the wines are transferred to wooden barrels for malolactic fermentation. During this time, the base wines are tasted and analysed closely in the estate’s lab, until – little by little – the blend is defined. The final blend is matured for 18 to 21 months in oak barrels, of which only around 50% is new. The partial use of old barrels for maturation allows the finished wine to more accurately express the characteristics of the vintage, the varietals and the terroir of Chateau Palmer.

Chateau Palmer: The Grand Vin and its Alter Ego

The eponymous Grand Vin of Chateau Palmer is a complex expression of Cabernet Sauvignon, Merlot and Petit Verdot in a proportion defined by the vintage each year. Thomas Duroux describes Chateau Palmer as an expression of moderation over ostentation, a harmonious symphony of aromas and flavours, powerful tannins and a velvety mouthfeel with a very generous length on the palate. While they are also enjoyable young, these Bordeaux wines blossom in the bottle, evolving incredible complexity and aromatic richesse over time, while also maintaining a silky and delicate texture. Each bottle of the estate’s Grand Vin is graced with a beautiful label, displaying the neo-Renaissance chateau in gold against a black backdrop. The 2015 and 2016 vintages, exceptionally successful through the Bordeaux wine region, were heralded by critics around the world as a magnificent, receiving 98-100 points from both James Suckling and Wine Enthusiast.

While the Chateau Palmer Grand Vin is an expression of complexity, the estate’s Second Wine, the famous Alter Ego, presents a more spontaneous interpretation of the same great terroir. First created in 1998, the Alter Ego results from a different take on selection and blending. This Second Wine is supple and well-rounded, with more fresh fruit than its distinguished older brother and with a crisp intensity that makes it a more approachable alternative. But despite its fresher, more youthful nature, Alter Ego maintains the silky tannins and beautiful acid structure that has become a hallmark of the Chateau Palmer style.