Millésima x Palmer
uncovering the secrets of a Margaux icon

Somewhere along the Médoc's château-lined wine route stands a majestic building famous among wine enthusiasts the world over... With its impressive architecture, Château Palmer is one of the iconic properties in the Margaux appellation area. Château Palmer has invited Millésima in to discover the iconic estate's secrets and give you the chance to enjoy the full Palmer experience with rare and exceptional vintages into the bargain. Learn about the legendary story of a Margaux icon with the Millésima x Palmer partnership...

Château Palmer from 1814 to present: the heritage of a historic Margaux property

In 1814, Lieutenant-Colonel Charles Palmer acquired the Gascq estate, which had been renowned for its wine since the start of the 18th century. The energetic and ambitious Palmer strove for almost 30 years to make the property more attractive, before leaving it his name. The Mähler-Besse and Sichel families then turned Château Palmer into a top producer of Bordeaux wines. Since 2004, Château Palmer has been managed by the talented and passionate Thomas Duroux, who has worked tirelessly to keep the wine at its best, while making an unprecedented transition towards sustainable and eco-friendly viticulture. Today, Château Palmer shines forth in wine-growing Margaux like never before.

Château Palmer has given us special access to its cellar and is offering you an exclusive opportunity to immerse yourself in the story of the estate's great vintages... Go back in time to experience the vintages behind the legend of the great Bordeaux years... 1983, 1989, 1990, 1995, 1999, 2000, 2005 and 2008…. The stunning results produced by Château Palmer in these years set the hearts of Margaux wine enthusiasts alight worldwide. Château Palmer's story also includes two rare wines which differentiate it from other Médoc varieties.

A myth in Margaux

Time, right on time. The year 1983 benefited from ideal weather conditions for each cycle of vine development: hot and dry in June for flowering, a heat wave at the beginning of the summer at the time of veraison, and hot and dry again in September when the grapes were fully ripe. In the end, sugar levels comparable to those of 1982 and very ripe tannins.

The brio of the great precocious

Hot in front. In 1989, May saw the vineyard in bloom; June, July and August rivalled each other in warmth. The vines sweat, the grapes concentrate. The earliest vintage of the century promises to be grandiose. Even more dazzling than 1982.

The time of promises. In this year 1990, everything suggests that this Palmer is going to be great. On the one hand, two great wines have preceded it. On the other hand, the summer was particularly hot, even tropical in August. Never seen since 1982 and, before that, 1949 and 1947. Three illustrious vintages...

The promises of modernity

In time, everything goes. Not a cloud over the summer of this vintage. Barely a few rains and a hint of freshness in September. The result? A harvest carried out at optimum ripeness and, in fact, a wine of great aromatic richness.

A vintage of great refinement

The Cabernets. After a slow and regular maturation, they are the ones who this year reach an exceptional concentration. Sauvignons and Francs thus sign a wine, particularly dense, spicy, complex. A great vintage.

Classic. No or little cloud on this vintage. Literally and figuratively. Apart from a few rains in September, the grapes benefited from hot and dry weather, ideal for reaching optimum ripeness.

A full and rich vintage

Concentration. Well beyond the expectations nourished by a favourable climate, the grapes of our plots have concentrated with a rare intensity. Never before had the Cabernets-Sauvignons reached such a high sugar content. The vintage is feeling the full effect!

The powerful charm of maturity

Guard. This is the main characteristic of this vintage. From mid-July, dry and fine weather allowed the grapes to ripen slowly, surely. Their quality, combined with ripe tannins and supported by sufficient acidity, produced a great Margaux with a very long ageing potential.

An historic drought for an exceptional vintage

Guard. This is the main characteristic of this vintage. From mid-July, dry and fine weather allowed the grapes to ripen slowly, surely. Their quality, combined with ripe tannins and supported by sufficient acidity, produced a great Margaux with a very long ageing potential.

A vintage that has come a long way

Risen from the dead, this vintage has come a long way. The fault lies in the cool and humid weather conditions from mid-March to the end of June. Fortunately, "after the rain, the fine weather". Enough to allow the latest grapes to reach maturity slowly...

In the 21st century, Château Palmer again started mixing in wines from outside the region: an old tradition seen at the great Bordeaux châteaus. The Historical XIXth Century Wine was born. This outstanding blend combines wine from Palmer and a great wine from the northern Côtes du Rhône and is certainly historical!

a little-known wine worth trying

Until the 1930s, Château Palmer used to produce a few barrels of white wine just for the owners, as was common in the Médoc. Although the practice gradually tailed off, two bottles of 1925 Palmer white wine were discovered in the château cellar at the end of the 1990s. Since then, Château Palmer has decided to revive the tradition by planting the iconic Bordeaux white grape varieties Muscadelle, Sauvignon Gris and Loset. Since 2007, Château Palmer white wine has been produced in very limited quantities and only for an exclusive few. With Millésima x Palmer, you have the opportunity to discover this rare Médoc white wine...

For viticulture to succeed, care needs to be taken with the vines and surrounding environment. Early on, Château Palmer became a pioneering exponent of the biodynamic approach in the Margaux appellation area. The estate's philosophy is that a vineyard is a harmonious living being whose true nature is to be independent and balanced. So, they aim to look after the plants while helping them develop their immune systems to become more resilient. 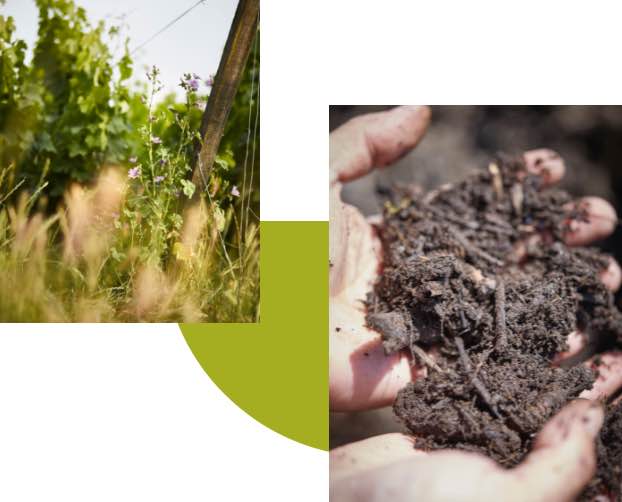 At Château Palmer, this desire to take care of the environment, the vines and the men and women who work on the vineyard each day has meant transitioning to a biodynamic approach. From 2009, one hectare was worked using biodynamic principles. In 2013, the estate turned 33 hectares over to a vintage that saw plenty of rainfall and was capricious in nature. The results exceeded expectations and, since 2014, the entire Château Palmer estate has used biodynamic methods.

a vineyard in perfect harmony with nature and biodiversity

The benefits of a biodynamic approach were soon felt at Château Palmer. Birds and insects returned thanks to the various grasses and plants growing between the rows of vines, while soil microbial communities and oxygenation boomed. Château Palmer decided to turn to age-old farming lore in a bid to care for the whole ecosystem, while looking after this expansive Margaux terroir and making it more attractive. This decision was absolutely the right one, delighting fans of the estate...

The estate has taken this biodiversity-maintaining mission a step further by allowing a flock of 190 Landais ewes to graze on vineyard plots. From the start of November to the end of March, the vines are dormant and resting. Meanwhile, the sheep come in: moving between plots, nibbling the grass and keeping shoots down. They enjoy the richness and diversity of the ground cover and the nitrogen-rich material they add to the soil acts as a natural fertiliser. Thanks to this ovine activity, the vines look after themselves naturally just like a garden.

In 2014, Château Palmer decided to reintroduce a cattle breed that had almost died out in the Bordeaux region. In the 19th century, Bordeaux's châteaus had a herd of cows serving two main purposes: providing milk and compost for the vines. These rustic bovines clad in black and white were Bordelaise cattle. Threatened with extinction, the breed was saved by the Conservatoire des Races d’Aquitaine which works to preserve livestock breeds. Working closely with this organisation, Château Palmer paid homage to the breed by having three cattle join the estate. There are now a dozen animals in the herd. These Bordelaise cattle not only help safeguard the species' future but provide sustainable compost to fertilise the vines and the Château Palmer estate. Things have come full circle... 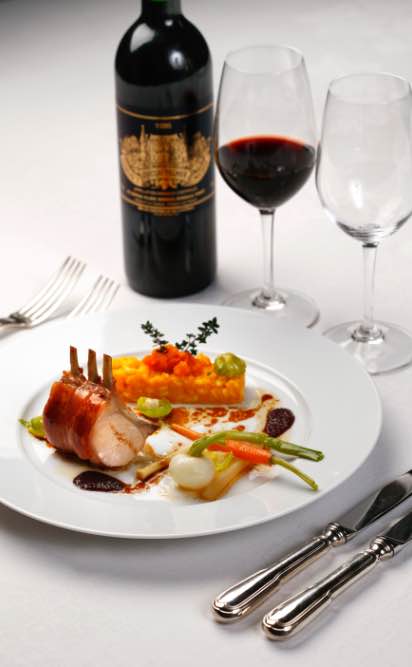 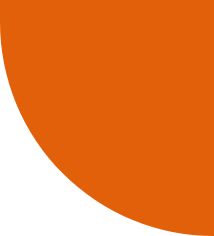 One of Château Palmer's best-kept secrets can be found in its kitchens. The Japanese-born chef Seiji Nagayama, who trained with the greats (chef Joël Robuchon and Hôtel Le Bristol in Paris), has made the Palmer vegetable garden his personal playground. Château Palmer's vegetable garden has given his creativity and fine knives just what they need to brighten up any dish. He can make savory, marjoram, marshmallow, hyssop, common rue, yarrow, wild rocket and curry plant (Helichrysum italicum) go beautifully with Château Palmer wines. Offering a feast for the eyes and the senses, Château Palmer is an ode to life and a place for coming together, enjoyment and sharing, where gastronomy and wine culture are as one. 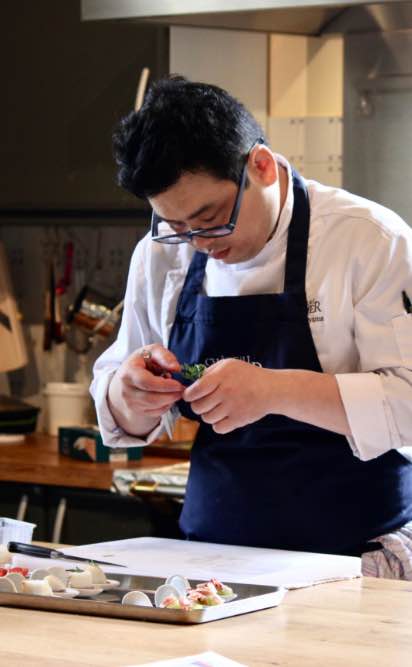 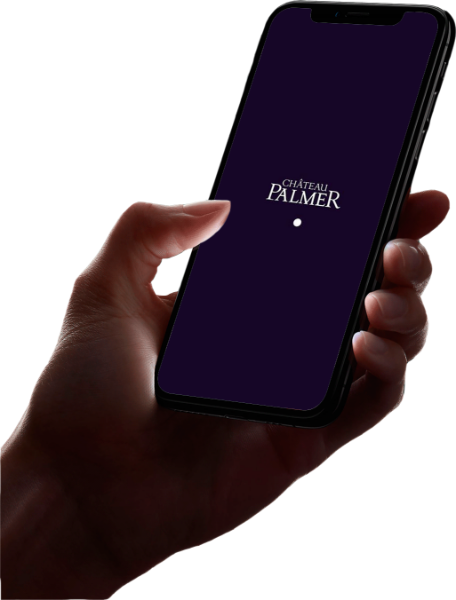 Learn about your vintage's story with the Château Palmer mobile app

Enjoy a unique tasting experience as you discover the story behind every bottle of Château Palmer wine using the estate's official mobile app. The app is exclusively for the estate's own wines and will allow you to explore the château's cellar, check if a bottle is authentic and make tasting comments with direct access to each vintage's technical sheet. It also provides serving advice and suggestions for wine and food pairings from chef Seiji Nagayama to take your at-home Château Palmer experience to the next level. Enjoy a unique experience as the app guides you step by step from discovery to tasting.