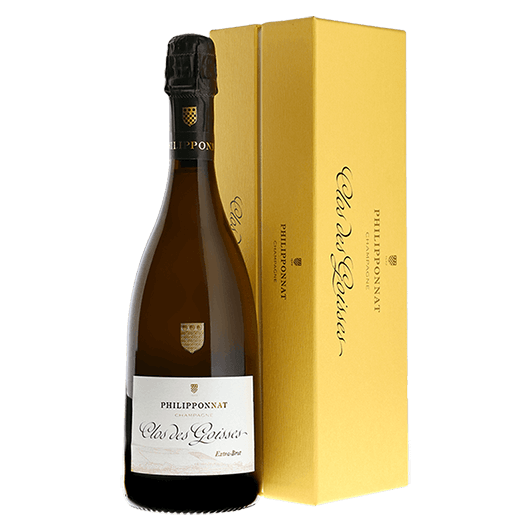 The expression of a unique terroir in a prestigious champagne

Established for nearly five centuries in Mareuil-sur-Aÿ, the Philipponnat Champagne House is one of the historic names in the Champagne region. Singularity, excellence, generosity and simplicity are the values that guide this house, which has remained a family-owned business. Owned by the house since 1935, the mythical Clos des Goisses is one of the oldest and most prestigious plots in the Champagne region. This utter gem is the source of rare and exceptionally powerful champagnes.

The Philipponnat Champagne house reigns over an exceptional 20-hectare vineyard composed of Premiers and Grands Crus in Aÿ, Mareuil-sur-Aÿ and Avenay.

The Clos des Goisses spreads across 5.83 hectares of vines and is situated on a 45° slope and planted with Pinot Noir and Chardonnay vines. The name stems from the old Champagne dialect "gois", which means a very steep hillside. Resting on pure chalk soils and facing south, the Clos des Goisses is one of the warmest terroirs in the Champagne region. The plot’s average temperatures are 1.5°C higher than in the rest of the region. Due to its steep slope, the Clos des Goisses vineyard is worked by hand and the plots are rigorously monitored, excluding the use of synthetic herbicides and insecticides. The soil is worked with ploughing and weeding.

A harsh winter gave way to a stormy spring. Mild and wet weather then led to a high level of mildew. Five weeks before the harvest, hot and dry conditions enabled the grapes to reach an exceptional and healthy condition. With more sunshine than in 2008, the 2009 vintage produced fruity champagnes with a moderate acidity.

Brilliant, this champagne showcases a beautiful golden colour. The effervescence is extremely fine.

The aromatic palette is complex and expressive. The first nose opens with spicy notes, evoking the freshness of pepper and chilli, followed by toasty notes reminiscent of wood ageing. Aeration then brings out the fruity character of this 2009 vintage with notes of Morello cherry and amarena cherry liqueur.

From the outset, the wine offers a seductive freshness and minerality. The fruity notes that develop on the palate resonate with the notes perceived on the nose. The structure of the wine highlights its vinous character, the intensity of which continues through to a lingering finish.

An exceptional champagne and a wine for gourmets, the Clos des Goisses 2009 by Philipponnat goes wonderfully well with the most noble dishes. Game, caviar, truffle dishes or soft cheeses sublimate its generosity and power.

In order to allow it to express the fullness of its personality, it is recommended to decant Clos des Goisses 2009 before tasting it.

Having reached perfect maturity after a prolonged ageing period in the house’s cellars, this highly sophisticated champagne will continue to evolve over the decades to come, when cellared in optimal conditions.

J. Robinson
16.5
20
Wine Advocate-Parker :
The 2009 Extra Brut Clos des Goisses is showing brilliantly, unfurling in the glass with aromas of warm bread, fresh peach, ripe citrus fruit, lemon confit and fresh pastry. On the palate, it's full-bodied, deep and layered, with a textural attack that segues into a muscular, tight-knit core that's multidimensional and intensely mineral, concluding with a long finish. Only 20,000 bottles were produced--in other words, half the legal yield. This is a serious, structured Clos des Goisses that transcends the vintage's tendency to facility, and it will merit and reward extended bottle age.
Other wines that Could be of interest to you