My account
My account
Profile
Addresses
Checkout Options
My orders
Log Out
Shopping Cart
Your cart is empty
Looking for inspiration?
Our special offers
RP97
JR17.5
AM93 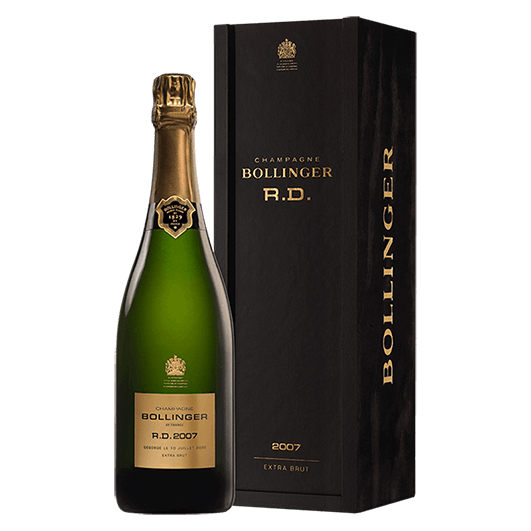 Timeless and legendary, the Bollinger Champagne House, nicknamed "Boll" by the inhabitants of the Champagne region and "Bolly" by the English, is part of an exclusive group of great Champagne houses. Founded in Aÿ in the Marne department in 1829, the Bollinger Champagne House has built its style around originality and excellence. From procuring the grapes to the winemaking process, they pay meticulous attention to detail. Fermentation is carried out in small oak barrels and the ageing of the vintage cuvées takes more than ten years, twice the appellation’s required time.

It was during the 1960s that the house gave birth to the R.D. cuvée for "Récemment Dégorgée", a symbol of Bollinger's bold creativity. Designed by the illustrious Madame Bollinger, Cuvée R.D. is an "Extra Brut" vintage champagne aged on lees, offered for tasting just after disgorgement. Unfettered by the rules of its time, the R.D. Bollinger cuvée, by creating a unique taste, lies at the root of a revolution in the world of Champagne.

An exceptional champagne produced exclusively during great years, Bollinger R.D. 2007 unveils the exceptional aromatic expression of its vintage in a Champagne that has taken the time to evolve while still maintaining its shine.

The vinification and ageing

After the harvests, the Chardonnay and Pinot Noir grapes are taken to the cellar in order to begin the custom-made winemaking process. The grapes are fermented exclusively in oak barrels. Thereafter, the ageing time is particularly long, over four times longer than the appellation’s regulations, in order to tirelessly transform the aromas until a perfect wine alchemy is obtained. Ageing is carried out under cork. Bollinger R.D. 2007 is put up for sale only a few months after disgorging, giving the wine a remarkable freshness.

The aromatic bouquet is complex and particularly marked by aromas of honey and brioche. Then, many nuances of spices such as ginger, cumin or caraway harmonise with hints of mirabelle, dried apricot and fresh hazelnut.

Bollinger R.D. 2007 embodies a great champagne with a lively and energetic attack. White plum, walnut and aniseed are highlighted and reveal a superb aromatic expression. On the palate, the beautiful freshness and the incredible tension of this Champagne are merged together.

Bollinger R.D. 2007 will enhance saffron-based dishes such as langoustine with saffron vinaigrette or poultry in a saffron and ginger sauce.

Bollinger R.D. 2007 offers two great tasting moments. It is possible to taste it in the year following its disgorging in order to fully embrace its particular aromatic and complex fruity notes. However, Bollinger R.D. 2007 can also be savoured after several years in the cellar, where all the depth of its aromas and the remarkable character of its great ageing potential will be revealed.

For an optimal tasting experience, serve at 8°C.

Other wines that Could be of interest to you