A Charles Heidsieck champagne with rounded notes of candied citrus

Charles Heidsieck is a small but very well-known Champagne House. Always displaying an impressive elegance and charisma, the champagnes of Charles Heidsieck grace the tables of wine-lovers around the world.

The House cultivates roughly 60 hectares of vines in the Marne and Aube regions of Champagne. The Charles Heidsieck 2008 Vintage Brut is produced from Pinot Noir ( (60%) and Chardonnay (40%), grown on the parcels of Maison à Oger, Avenay Val d'Or, Aÿ, Chantilly and many other great terroirs. The fruit included in the blend of the Brut Vintage 2008 is exclusively harvested from Premiers et Grands Crus.

The 2008 vintage is surely one that will be remembered in Champage. The seasons followed one another, generally characterised by mild temperatures. During the harvest, the sunshine was quite generous, promising a superb vintage ahead.

At the winery, the vinification of the Charles Heidsieck Brut Millésimé 2008 began with alcoholic fermentation and was followed by malolactic fermentation. The latter contributed a certain roundness and vinosity to the wine, which marks the signature style of the house. The wine was then matured in vats and bottled. They aged for 10 years in the chalk cellars of the estate in Reims.

The Charles Heidsieck 2008 Vintage Brut reveals a sparkling yellow-gold colour with green reflections. The effervescence here is quite fine. On the nose, the bouquet is complex. Notes of dried fruit and candied citrus flood the palate. The finish is persistent, offering hints of caramel and yuzu.

The 2008 Brut Vintage will reach its peak around 2022, though it is also possible to taste it now. It can age safely in the cellar until 2032.

Wine Advocate-Parker :
Disgorged in February 2019 with eight grams per liter dosage, the 2008 Brut Millésimé unfurls in the glass with beautiful aromas of citrus oil, crisp green apple, linden, fresh walnuts and warm bread. On the palate, it's medium to full-bodied, taut and incisive, with a deep and layered core that integrates its racy spine of acidity, excellent concentration and a long, delicately nutty finish. Impeccably balanced, this is Heidsieck's finest vintage bottling since the 1980s.
Champagne

By the same producing estate 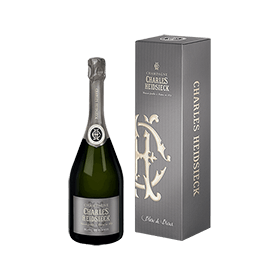